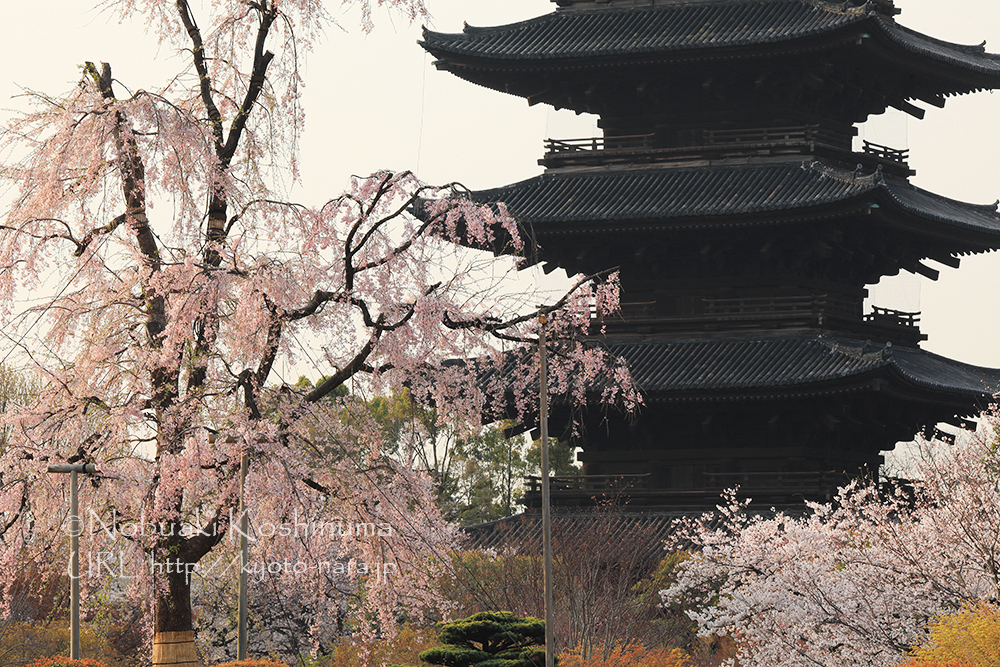 Toji temple was built as an official temple for heian kyo jingo, and flourished as the root dojo of the Shinsei sect (Somotoyama) in Kujo-cho, Minami-ku, Kyoto.

Through the Rajomon Gate, the 84-meter-wide main street extends straight north, and you can see the elegant Suzaku gate ahead of it.

The distance from the remains of the remaining Rajomon Gate to the SuzakuMon site is about 3km.I’m surprised at the size of the scale.

Then, please enjoy the photograph from the season of cherry blossoms♪

In the season of fresh green, young leaves shine with their lives in the Toji precincts.

In the back is Minamidaimon (Important Cultural Property).

Minamidaimon Gate was built as the west gate of Sanjusanzendo, built in 1895 as the southern gate of Toji Temple, and is about 18meter wide and about 13 meters high, making it the largest gate in Toji Temple.

The shadow of the tree was still a long morning time, and the two of them corrected their posture in front of the golden hall (national treasure) and prayed for them were impressive.

The main shrine of The Golden Palace is a yakushi who cures all diseases.

I hope your wishes will come true.

The Golden Palace was built the earliest of all the halls, but it took 27 years to complete due to the bad financial situation.

It is presumed that it was completed in the 14th year of Hirohito (823), when Toji was given to Kukai by Emperor Tsuji.It was burned down in 1486.The existing building was rebuilt in 1603 by Hideyori Toyotomi.

A five-story pagoda (a national treasure) wrapped in cherry blossoms.
The best time to see cherry blossoms is usually from the end of March to the beginning of April.(Confirmation)

Fujisakura is about 13 meters high.The lighting of fuji cherry blossoms at night is also very popular, and it is held every year.

When fujicherry blossoms are in full bloom, it is said that it is very crowded before the day before the visit ends, and I want to visit it some day though it has not visited yet.

The because this shows toji as space.

Because, the Buddha and the Great Sun Nyorai, the gods and Buddha, the enemy and the ally, the foreign country and our country coexist in Toji, and the Dainichi Nyorai which represents the truth of the universe is enshrined in the center of The Temple.

The auditorium (pictured above) on the north side of the Golden Hall (National Treasure) was completed around the second year of Jowa (835).The present auditorium was rebuilt in 1491 in the Muromachi period.

The Buddha, who has a mental and physical illness, meets first, is the Yakushi Nyorai of kindo, and the auditorium is where people meet universal truths through their own illnesses.

In the huge space of the auditorium, it is a place where the Buddhas of 21 precious people preach universal truths, and it is also meaningful that the golden hall and the auditorium are built next to each other.

The five-story pagoda (national treasure) of Toji Temple is a tower that is also a symbol of Kyoto, and the surrounding area is dotted with shooting points that feel like Kyoto.

If you have time, please stop by Karahashi Nishiji Park .)This is the place where “Saiji” of the same size as Toji Temple is left with the Saijo and the cornerstone.

The location of Karahashi Nishidera Park is about a 10-minute walk from Toji Temple.

When maples planted in the Ikeizumi migratory garden of Toji Temple begin to turn red, many people visit the precincts.

Maple leaves with a refreshing gradation.

Autumn leaves around the Ikeizumi migratory garden.It is very crowded, so early morning is recommended.

On the 21st of every month, Toji Temple holds a new day.It is said that the day of the ennichi is the day when the God and Buddha have the “marriage”, and it is said that there is a great merit when visiting the new day.

At first, the day of the founder, Kukai, was held on March 21, so the annual ennichi was held, but after 1239 it has been held every month.

The photos were taken when I visited in January and February.It was a cloudy sky and a cold day, but surprisingly many people visited.It depends on the shopkeeper, but if it is early, it opens at 5 a.m. and is open until about 4 o’clock in the evening.

The precincts are crowded with stalls.

When there is a crowd, you want to look into it, and next to the person who is being explained, you will hear “Humhum”.

Unlike the congestion of shopping in the city, Kobo City (Antique City) and festivals are a strange event because it is an atmosphere that many people can enjoy.

I found a wonderful turtle ornament with a deep shade.

In Kobo City ( Antique City), many warm handmade products are sold, and it is one of the charms that you can talk directly with artists.

The shopkeeper does not open a store every month.When you find something you like, it’s important to buy it when you meet it.

There are many exhibits related to Buddha, iron kettles, and antiques.

The water boiled in an iron kettle has an increase disused iron content than the usual one, so it is also recommended for those who are drinking “sayu”.

It seems that there is no problem if the iron bottle with rust boils water and is colorless and transparent.If the hot water is red and cloudy, or if you are concerned about the smell of rust, you can take care of it.It is important to keep the inside of the iron kettle empty and dry after use.Please ask the shop for more information.

Time goes by in no time.

If you are hungry, there are various stalls such as oden, yakitori, okonomiyaki, takoyaki, grass mochi, pressed sushi, etc., so please try to enjoy the atmosphere by all means♪.

[Visiting place] Toji Kyoto City Minami-ku Kujo-cho 1 [ad
mission fee] precinctism is free [vi
ewing time] Kobo City is 5 o’clock am 16 o’clock [parking]
At the time of Kobo City, it is a paid parking lot in the vicinity.
[Access] Kintetsu “Toji Station” get off at 10 minutes on foot, JR “Kyoto Station” (Hachijoguchi) get off at 15 minutes on foot 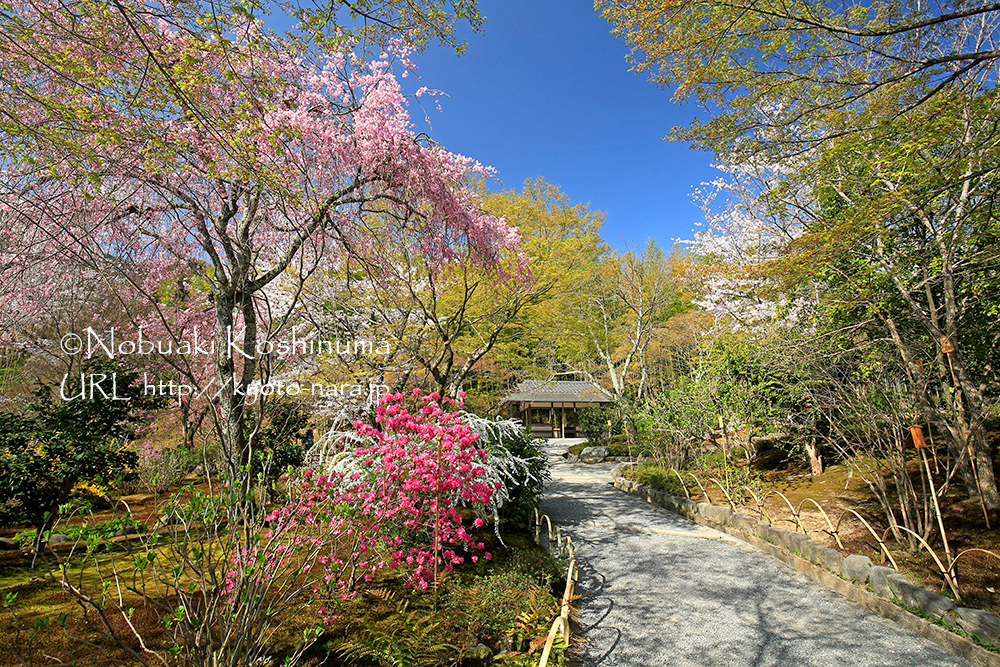 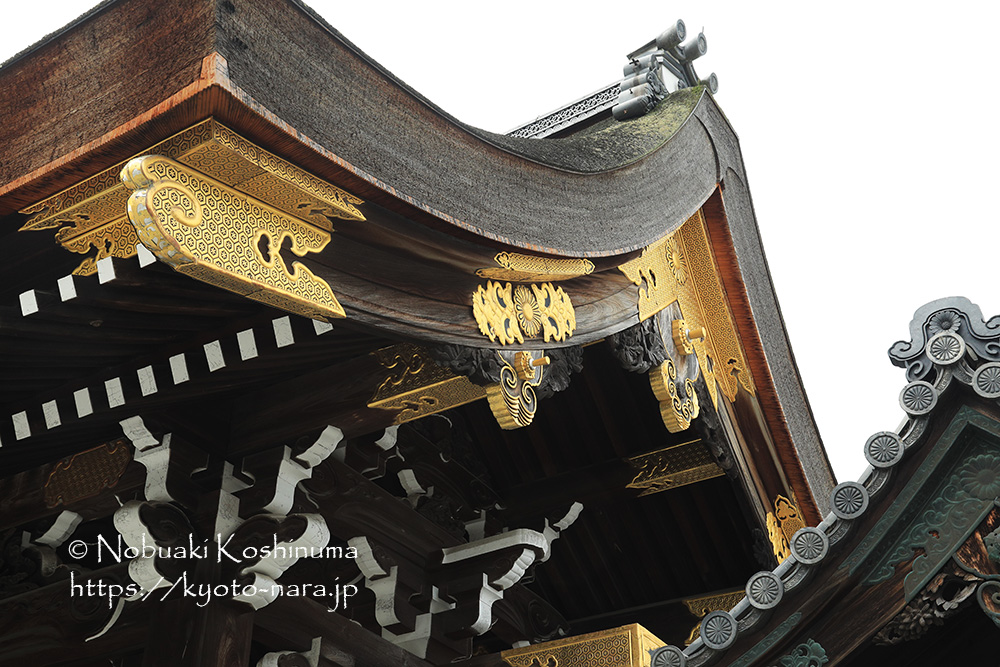